“Go-Live – But Only in Individual Cases”

How far along is the digital transformation in the real estate industry? The group of experts assembled by immobilienmanager came to conflicting conclusions – progress has been made, but there is still a long way to go.

A year ago, immobilienmanager gathered market participants and experts from various sectors at Apleona’s stand at the Expo Real trade fair. They were united by the fact that all were drivers of digital innovation in their fields. In 2018, the main issue was how to focus on the user.
A year later, they have all made some progress. But how much? “The proptechs are still working hard. We are seeing good pilot projects, but there is still a lack of scaling. In this respect, the market has not moved on a great deal,” said Apleona CEO Dr. Jochen Keysberg, describing the status quo. Dr. Zsolt Sluitner, CEO of Siemens Real Estate, agreed: “Development is very slow.” So we can talk of a “go-live,” but sadly only a small one.

The excellent market conditions offer one explanation for the inertia. “There’s no pressure,” said Hendrik Staiger, summing up the dilemma in a nutshell. He is the CEO of the CREM association Crenet and a member of the executive board of BEOS AG.

But all this does not mean that nothing is happening. “The world is changing,” said Susanne Bonfig, Head of Digital Asset Management at Commerz Real. Companies are increasingly recognizing that concentrated investments in their USP are crucial but that not all resources that have been purchased and operated on a standalone basis in the past provide a competitive advantage. “So cooperation in the real estate industry is also steadily increasing,” said Bonfig, citing joint standardization initiatives and standard software solutions that can then be used by everyone in the industry as first signs of progress. According to Dr. Sluitner and Hendrik Staiger, however, the major corporates still tend to keep their knowledge and know-how for themselves and to be wary of cooperation.

The education landscape is responding, Professor Wolfgang Schäfers from the University of Regensburg reported. “German data science education is now the third-best in the world.” Even real estate programs – at least at his university – are integrating blockchain applications, virtual reality and machine learning. However, Schäfers sees a specifically German problem for research and teaching: “There is no official data supply in this country. We are top in basic research, but have to rely on US data for data-based studies.”

The group was split over the question of whether data standards should be unified in Germany – for example so that portfolio managers do not have to cite property sizes in gross floor area (GFA) and according to the GIF (German Society of Property Researchers) standard simultaneously. Hendrik Staiger believes that the desire for unified standards is understandable, but not very realistic: “The data landscape is too fragmented. Concepts such as “data lakes,” in which all data are collected and which allow the analysis even of unstructured data using suitable tools, are more crucial today.”

However, the group was completely agreed on one point: digital transformation has to do with transparency, information sharing, reciprocal learning and mutual development – all virtues that are evidently underrepresented in Germany. This is another reason why the USA is a step ahead, said Wolfgang Schäfers: “We have great basic research, but we can’t get the findings off the starting line.” Hendrik Staiger attributed this to a lack of entrepreneurship in Germany.

Dr. Keysberg illustrated that it is possible in this country and that the “go-live” is actually happening by pointing to the cooperation between Apleona and IBM. At IBM Watson Towers in Munich, both partners are developing and testing cutting-edge innovations in the IBM Garage model, such as Instant Room Booking, a solution to simplify the booking of meeting rooms, or the “EnergyPod,” allowing energy-restoring naps in the office. “We benefit from a very helpful feedback culture. The number of solutions is not important, only the scaling potential and backend,” said Keysberg.

Stefan Lutz from IBM credits the real estate industry with some progress and numerous pioneering approaches, even if it is not “the fastest of all the sectors.” Competitors had long since recognized the advantages of digital connectivity, he said. For example, logistics providers around the world are using the open and neutral industry platform TradeLens, which is based on IBM blockchain technology, in order to share information securely and transparently. Food Trust is a similar platform in the food industry. Lutz is sure that the real estate industry will not be able to dodge digitalization: “Like Apleona, facility managers will have to confront the new challenges in order to compete at the top level in the market.”

Lutz also explained how digitalization actually works: “Simply get started, develop in an agile manner while bringing the necessary expertise to the table, then quickly validate with the targeted users and test!” All digitalization is based on cutting-edge technologies such as data analytics, artificial intelligence, blockchain or hybrid cloud. However, the industry is still placing a few obstacles in its path. If, for example, a development’s return on investment is supposed to be definable from the start, it will run into difficulties. “The issue of monetization often kills innovation in the early stages,” said Lutz. “We mainly see four arguments for getting started even when the business case and the scalability of the final result are not immediately foreseeable – differentiation from the competition, more sales due to new business areas, savings and thus margin improvement, and last but not least access to talent. The latter is particularly important because all industries are desperately searching for good specialist workers.”

Some links in the value chain are actively resisting, however. In particular, building information modeling (BIM) is not gaining traction as a method in Germany. “The number of BIM projects in new construction is vanishingly small,” confirmed Dr. Keysberg. Dr. Zsolt Sluitner, responsible for twelve million square meters of lettable space with his Siemens Real Estate, shared an even gloomier view of the situation: “BIM is seen as a matter of course in many countries, just not here. Some of our experiences have been truly awful.” This pains him all the more because he sees BIM as a fundamental requirement for the creation of digitalized models. “Digitalization begins with planning, and for a digitalized product I need a digital twin.”

While Siemens is currently launching a BIM project at Frankfurt Airport, other building owners and the project developer scene in Germany have been very reluctant. Wolfgang Schäfers found this all the more aggravating because BIM was partially developed in this country. “Planners are entrenching themselves behind the official scale of fees for architects and engineers so as not to have to implement BIM.”

Concepts for digitalizing existing holdings are also still at a rudimentary stage. Susanne Bonfig reported on applications that are working well with regard to energy. “We can now sensitively control the building climate three days in advance. This results in energy savings of 15 to 20 percent.”

To end, Dr. Jochen Keysberg pointed out that innovation and scaling require partnerships between owners and service providers. “We are developing new role models with some major corporations.” Eventually, this will have to lead to new contractual models: “Contracts are not currently designed for innovation. Service providers have to participate in such innovations, then they can help to promote them with a clear conscience.” 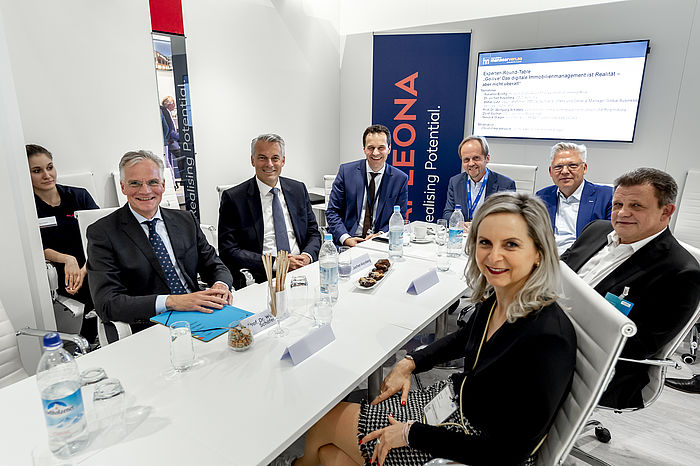 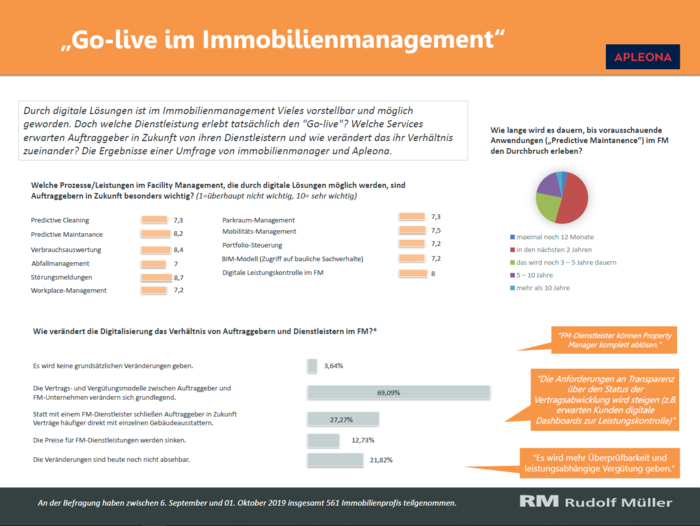 Article “Go-Live – But Only in Individual Cases”