CA Immo has tasked Apleona HSG Facility Management with technical and infrastructural facility management and security services for the MY.O office building in Munich. The service agreement has been concluded for three years. The implementation phase is currently in progress. In addition to traditional FM services and 24-hour emergency support, the services agreed notably include energy optimization without disruption to operations, which is ensured using the Apleona web application Enerlutec to collect and evaluate consumption in the building.

MY.O offers 25,000 m² of rental space and is located next to the Hirschgarten park in the Laim district of Munich. It consists of a block building with five and seven floors respectively, and a free-standing building with six floors and two basement levels containing around 200 underground parking spaces. The building was completed by the end of 2019.

Following on from the 16,500 m² MY.B office building in Berlin, MY.O is the second state-of-the-art office building for which Apleona is performing integrated FM services on behalf of CA Immo.

CA Immo is one of the leading real estate companies in Central Europe and is listed on the ATX benchmark index of the Vienna Stock Exchange. Its primary focus is on the letting and development of commercial properties, principally in the office segment. The company was formed in 1987 and has real estate assets of around EUR 4.7 billion in Germany, Austria and Eastern Europe. High-profile properties in its German portfolio include the Skyline Plaza in Frankfurt, the Tour Total and the John F. Kennedy Haus in Berlin, and the Skygarden and the Kontorhaus in Munich. 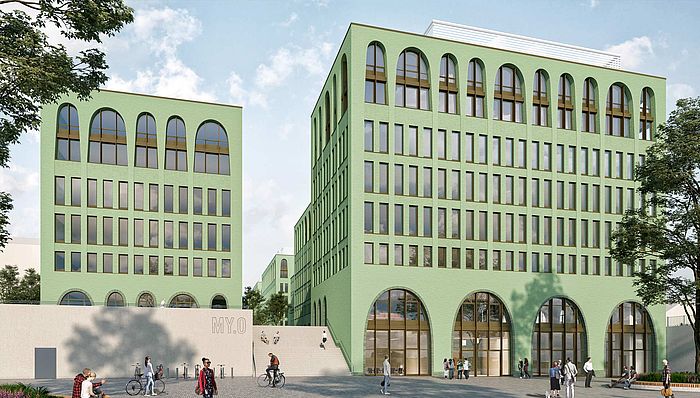