The interview was given by Lars Wiederhold and Ulrich Schüppler from the Immobilien Zeitung.

Apleona CEO Jochen Keysberg expects a wave of consolidation on the German FM market. In this event, Apleona intends to make much greater use of inorganic growth than before. Despite the coronavirus crisis, the service provider is also expected to continue growing organically this year.

In facility management, Apleona is currently benefiting from its major emphasis on technical services. “The coronavirus crisis has affected FM to varying degrees,” says CEO Jochen Keysberg, adding that catering and event management have been hit hard. There is some short-time work at Apleona in these fields, e.g. for major contracts in the Alte Oper or the Commerzbank Arena, both in Frankfurt. The impact on the cleaning business has been medium. “But things are picking up again,” Keysberg reports. After cleaning services were reduced in many properties because the employees had been sent to work from home, employees are now increasingly returning, as are the orders. In contrast to infrastructural facility management, technical facility management has hardly been affected, or has even developed positively overall in the crisis. “Our order volume has grown year on year in the past three months,” says Keysberg.

The CEO likewise expects “decent organic growth” in sales for 2020 as a whole. “Like in the 2008/2009 crisis, FM is proving relatively crisis-proof.” Even if parts of the service range have proven less crisis-resistant than others, restructuring is only to occur when business models turn out to be “impaired in the long term.”

Apleona is “on track” even in Italy, which has been particularly afflicted by the coronavirus pandemic, because industrial customers there kept working through the crisis and special contracts arose, such as the construction of tent cities. Apleona wants to continue seeking international activities in the future. International contracts with a larger German portion and smaller foreign portion are expected to be particularly interesting.

The transfer of many employees into working from home has worked better than expected, and sick leave has remained low. The IT upgrades in previous years proved a stroke of luck when the coronavirus pandemic broke out. “It caught us at the right moment,” says Keysberg.

Apleona has recently added some major contracts to its order books, including the integrated FM for all German locations of Bombardier Transportation. The contract covers an area of around 1 million m². In addition to technical and infrastructure services for the buildings and technical building facilities, Apleona is to perform production-related services for the Bombardier Group’s rail transport division. The partnership is still being expanded abroad.

Apleona will also take on integrated FM for all locations of SGS Germany, which includes buildings of SGS Institut Fresenius, for example. The contract involves managing a total area of nearly 100,000 m².

In Germany in particular, Keysberg sees a lot of growth potential in first-generation outsourcing – i.e. when the client previously always undertook FM itself. The service provider has recently grown considerably. Last year, with sales of around EUR 1.66 billion (up EUR 95 million on 2018), it took second place in the Lünendonk list of facility managers with the highest sales in Germany. It was beaten only by the building services provider Spie with sales of EUR 1.7 billion, which has been acquiring one company after the other for years.

While Apleona, in contrast to Spie, has previously held back from inorganic growth – with the exception of investments in proptechs such as Recogizer – the company now wants to target several candidates in conventional facility management. “The German market is heading for consolidation,” Keysberg predicts. Facility management in Germany had no affinity for sales before, he says, but this has changed due to the coronavirus crisis. Now, even larger companies are said to be going a different way, “after the family board has met”. Apleona wants to use this opportunity.

A planned takeover already came to light thanks to a publication by the German Federal Cartel Office in March. Apparently, Apleona HSG BS wants to acquire all the shares in the Bonn-based company CSG.PB, which is responsible for the property and facility management of offices and branches of Postbank. The purchase is expected to result in a not insignificant increase in Apleona’s order volume. 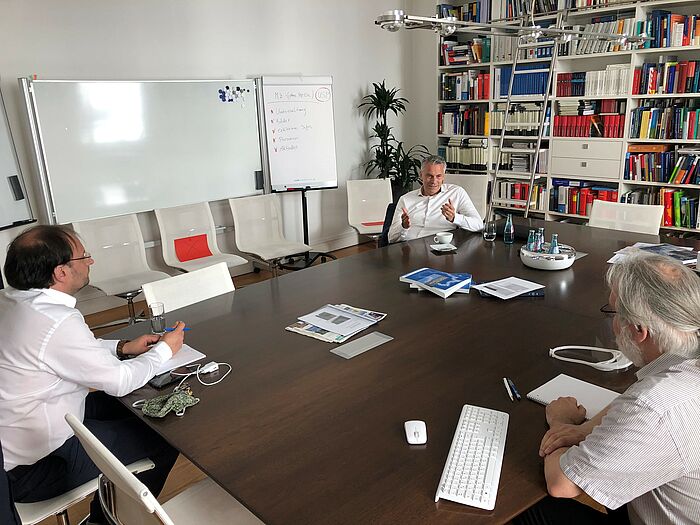