Motorworld München is taking shape under the roof of an landmarked former locomotive shed in the north of the Bavarian state capital. This will be an exciting venue where fans can experience cars and vintage vehicles. Among other things, it will include a hotel with 150 rooms, a movie theater and concert hall, conference rooms and offices, as well as workshops and special glazed parking bays for expensive vintage vehicles, classic vehicles, and sports cars. These glass boxes will allow the vehicle owners to park, service, and showcase their little treasures in a secure environment. There are further Motorworld locations in Böblingen and Cologne.

Apleona R&M Ausbau has been commissioned with a large part of the interior fitout of Munich Motorworld, which comprises six building sections in total. As a result of the dimensions (180 meters long, almost 90 meters wide, 18 meters high), the entire group of buildings, covering a total floor area of 59,000 m2, fits under the roof of the former locomotive shed. Since the buildings are not exposed to the weather, they can be erected entirely using drywall construction. Other disciplines that have been agreed on include fitting services, such as floors, doors, tiling, and painting. The parties have agreed not to disclose the volume of the contract.

“Undertaking all the project work, i.e. including the external facade, is an absolute exception in our business. An additional factor in the case of Motorworld is that the character of the old locomotive shed, with its spectacular steel beams, and the new, ambitious architecture of Motorworld need to be brought into perfect harmony with one another,” explains Apleona R&M Ausbau Managing Director Helmut Willer.

Motorworld München is set to be finished and opened in April 2020. Apleona R&M Ausbau has a high level of expertise in fitting out similar event properties. Its credentials also include the BMW museum in Munich and the ESO Planetarium in Garching.

The premises between Heidemannstraße, Lilienthalallee, and Maria-Probst-Straße, where Motorworld is now being constructed, have a long history. In 1916, the Bavarian gun factory of Friedrich Krupp AG was established here; the present “Zenith” and “Kesselhaus” event sheds still remain from this time. In 1925, the then state railway, Deutsche Reichsbahn, acquired the just under 20 hectare property and converted it into a repair workshop. One of the largest repair workshops for steam and, later, electric locomotives, was located in the locomotive shed Lokhalle 24, which was erected between 1938 and 1942 in the Bauhaus style with imposing facade supports and pillars. The repair workshop closed in 1995. 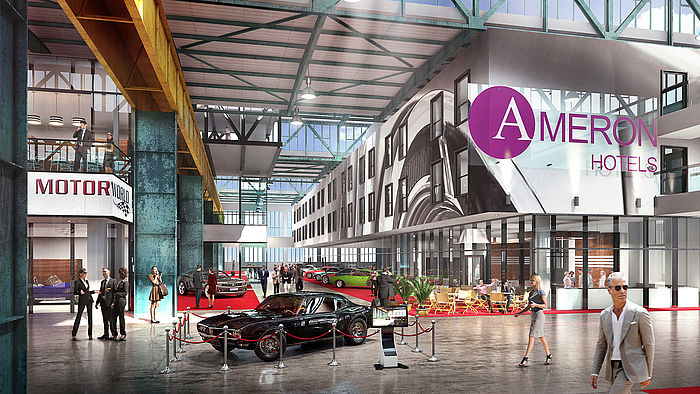