In November 2020, Apleona R&M Ausbau took on the interior work for the new flagship store of Düsseldorf-based clothing retailer Peek & Cloppenburg (P&C) in the "Westfield Mall of the Netherlands" shopping centre in Leidschendam, a suburb of The Hague. After a construction period of four months, all agreed works were completed in March 2021. Among other things, Apleona R&M Ausbau realised suspended ceilings, 1,800 m2 of drywall and 1,500 m2 of shopfitting walls for an area of 4,000 m2. In the course of the interior work, Apleona R&M also took care of the parquet flooring, tiling and painting.

The 4,500 m2 store, which extends over two levels, is located in the "Westfield Mall of the Netherlands" shopping centre. Peek & Cloppenburg acts as an anchor tenant for the operator. In total, the shopping centre houses more than 280 shops, restaurants, leisure and entertainment businesses on 117,000 m2, including a Kinopolis cinema with ten screens, the event centre "The O'Learys" and a food court with 22 gastronomic establishments. The project was led by French real estate and investment company Unibail-Rodamco-Westfield, a global developer and operator of flagship destinations. The latter aims to create environmentally friendly places of experience and contribute to the planning of "better cities".

Peek & Cloppenburg Düsseldorf is a long-standing regular customer of Apleona R&M Ausbau, which frequently commissions the fit-out company not only for its locations in Germany, but also in neighbouring European countries.Thanks to the rapid completion of the interior work, the "Westfield Mall of the Netherlands" was able to open as planned on 18 March 2021. 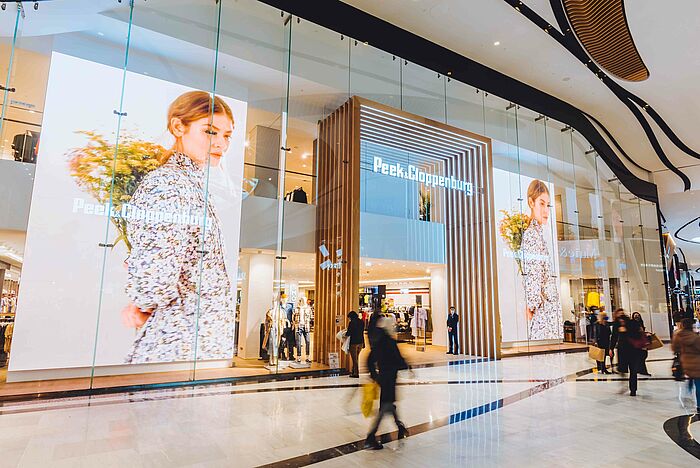